Cane Pruning in the Vineyard

During the winter while the grapevines are dormant, we perform the single most important vineyard task of the year: pruning. By removing the previous years' canes (branches, if you will) and just leaving one or two to produce the coming year's grapes, pruning dictates both the quantity of grapes for the next year and the canopy (leaves) that powers the quality of those grapes. Great pruning means that for the rest of the growing season, you'll be working in concert with Mother Nature to create superior quality grapes. Poor pruning means you'll be fighting Mother Nature the entire year—disease, too little sunlight hitting the grapes, too heavy of a crop, extra work in the vineyard during the growing season—headaches that persist into future vintages, too. Thus top-quality grapes and wines necessitate top-quality pruners. 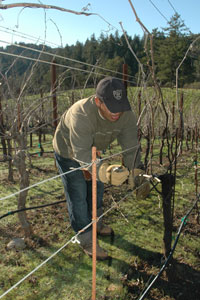 Pruning is where Pedro, our sole employee, is worth his weight in gold! Having pruned vineyards in Napa and Sonoma for almost twenty years, Pedro has pruned every single one of Montemaggiore's 15,000+ vines for the past six years. He knows to prune just the right amount—pruning too little would mean weak growth and pruning too much would mean too vigorous growth. He understands the capabilities and potential of nearly every vine based on prior years' performance. Pedro knows which soils are nutrient-deprived and which areas receive extra sun or shading. He can position a cane in order for it to receive optimal sunlight thus optimal fruitfulness and ripening. Pedro and his experience are irreplaceable.

Our method of pruning is called cane pruning, which requires that Pedro carefully examine a vine before making a single cut. A more common and quicker method is spur pruning, which doesn't require a lot of expertise (in fact, machines can do it). Cane pruning takes more time to perform but it leads to more balanced vines and ultimately higher wine quality. And after all, wine quality is our top priority. For more information on pruning, check out the VinesToWine blog (the author, Remi, is a friend of Lise's).