Now that the smoke has cleared from Sonoma and Napa counties, you are probably wondering what affect the recent wildfires have had on the 2017 wines. First, you should know that both Montemaggiore wines and our personal well-being were relatively unaffected by the fires! Healdsburg was completely spared, and the majority of our grapes had already been harvested. We did have 1 ton of grenache that remained; but since the vineyard sat in heavy smoke for over a week, we declined the grapes rather than risk smoke taint in the wine. More important are the broader effects of the fires on the vintage. There are five things you should know.

1. Most grapes were already picked

For the greater wine community, the good news is that the vast majority of north coast grapes—80 to 90%—had already been picked before the fires broke out on Sunday October 8 around 10pm. The bad news is the grapes remaining on the vine were some of our most expensive, for example big cabernet sauvignons that wine lovers covet. The even more discouraging news is that no one wants to talk about it! 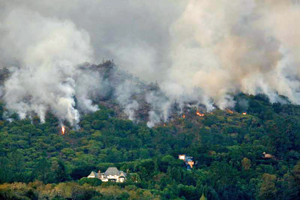 Luckily, the grapes for all rosé wines, almost all white wines, and most red wines were already harvested before the fires started in Napa, Sonoma, and let’s not forget Mendocino and Lake Counties. Rosé is made from under-ripe red grapes, so these grapes were all picked in August and September. White varietals like chardonnay and sauvignon blanc typically ripen before reds, so they were almost completely picked. Some whites in the cooler parts of Sonoma and Carneros hadn’t been picked, but they are an anomaly. Of the reds, most of the early and mid-season ripeners (e.g., Pinot Noir, Zinfandel, Merlot, Syrah) in most viticultural areas had been picked. Much of the late-season ripeners (e.g., Cabernet Sauvignon) had already been picked, but definitely not all.

Unfortunately, the vineyards not yet picked were among those producing the most expensive red wines. Grapes in the cooler, mountainous regions take longer to ripen (e.g., Atlas peak, where major fires erupted) thus hadn't been harvested. In other cases, the winemakers just wanted some extra hang time to gain more mature phenolics (especially after the heat wave that came over Labor Day weekend). Upon hearing news of the fires early Monday morning, many winemakers rushed out to pick any remaining grapes from vineyards not directly under fire.

2. Even short exposure can lead to smoke taint

The problem is that grapes exposed to heavy smoke for even as little as a half hour can lead to tainted wine (according to the Australian Wine Research Institute, AWRI, which has done a lot of research in this area). The degree of smoke taint depends on many factors including stage of grapevine development, grape varietal, smoke concentration, duration of exposure, and exact smoke composition. Unfortunately, the closer grapes are to harvest, the more susceptible they are to smoke taint—which is the case with these fires. Fortunately, however, cabernet sauvignon is thought to be less susceptible to smoke taint than other varietals—and cabernet was the varietal typically unharvested prior to the fires.

From a technical perspective, smoke-tainted wine arises from smoke compounds being absorbed directly into grapes, or absorbed via the leaves and subsequently translocated to the fruit. These compounds accumulate on the waxy cuticle of the berries, and bind rapidly with grape sugars to form glycosides that themselves have no smoky flavor. Thus the tainted grapes can taste completely clean, but glycosides with smoke taint precursors nonetheless exist. During fermentation the glycosides can break apart in the wine's acidic environment, releasing the volatile phenols into wine, and it’s their volatile nature that allows the smoky flavor to be perceived by your nose. As you drink, the volatile phenols turn into a vapor that gets sucked up retronasally (through the back of the throat) to the sensitive layer of nerve endings behind your nose that translates chemicals into odors. The really pernicious problem is that not all the glycosides break apart during fermentation, but may break down later during aging in barrel and in the bottle. So even if a wine has no perceptible smoke taint when its bottled, by the time you pop the cork, it could! 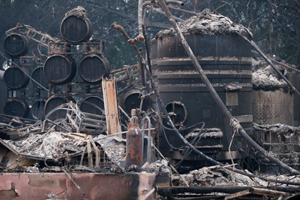 3. Smoke taint is difficult to eliminate and may recur

Winemakers have several options and tools for minimizing the effects of smoke exposure. The first step is to send the grapes to a laboratory to test for known smoke taint markers. Unfortunately, researchers still don’t know all the markers, so false negatives are a distinct possibility. If the risk or degree of smoke taint seems minimal, a winemaker can employ techniques to reduce the extraction and expression of smoke taint compounds—although they are unlikely to eliminate the problem completely. These techniques include:

4. As a consumer, you should beware

In general, you won't hear about smoke tainted wine in the news, primarily because a higher priority are the families displaced by over 5,000 homes burned down in Sonoma County alone! Also, 2017 wines are still in the process of being made, and the extent of the issue has not been fully assessed. But then again, no winemaker (who would like to keep their job) wants to talk about a problem that is hard to quantify now, and may have huge consequences in the future. When the wines are released, however, you should be armed with information.

How will you know if a wine is tainted? Firstly, only a very small percentage of wines from the north coast were potentially impacted by the fires. But when the 2017 wines start being released next year, you should be safe with whites and rosés. Of the reds, earlier ripeners like Pinot Noir and Syrah should be fine although expensive Cabernets might merit a bit more scrutiny (if for no other reason than they are expensive!).

If a wine has off-flavors like “smoky”, “burnt rubber”, “campfire” and “ashtray” which linger on your palate even after the wine is swallowed or spit out—it could be tainted (it could also have been aged in high-toast oak barrels). If you can't taste anything off-putting, then knowing when the grapes were picked (before or after October 8) indicates the risk of future taint. For a fine wine that you want to lay down for a few years, even if it tastes clean now, beware that it could be affected over time. Not only could the afore-mentioned glycosides break apart to release the smoky flavors, but as a wine loses its fruit flavors over time, any pre-existing smoke-related characteristics could become more prominent.

5. Effects on future vintages are negligible

Despite the short term effect of the fires, the vast majority of vineyards survived thus will continue to produce fruit in the coming years. Even if this year’s crop was affected, there is no carry-over from one growing season to the next. Because vineyards are typically irrigated (and have high moisture content), few vineyards were actually burned although some were singed on the edges. Interestingly, the house of a friend of ours was saved by a vineyard—the fires came within a hundred yards of their house but the vineyard in between acted as a fire break! 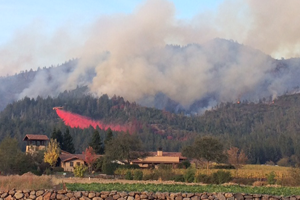 Another issue is the more than 2 million gallons of fire retardant dropped by air tankers and helicopters. While winemakers know not to make wine from any grapes affected, the impact on the health of the vineyard soils is somewhat unknown. Phos-Chek fire retardant is a proprietary formulation of 85% water, 10% inorganic fertilizer (to promote growth), and 5% other stuff (including a colorant so air crews can track where they’ve dropped). It is supposedly non-toxic and firefighters have been known to eat it, but a high accumulation of nitrite-based fertilizer in vineyard soils is not necessarily good in the short term.

I hope I've answered the majority of your questions regarding the fires' effect on the wines. If you have any additional questions or comments, submit them below. Please understand that we wanted to address this issue without minimizing or detracting from the devastating effect of these historic wildfires that burned over 10 percent of Sonoma County’s 1 million acres. Entire wineries burned down, thousands of families lost their homes, and the entire community in Sonoma and Napa is still in shock.

Do your part, drink more Sonoma County wines! If you want to make a more direct contribution, we recommend both The North Bay Fire Relief Fund (you can specify a particular county to receive your donation) and Undocufund (focusing on undocumented immigrants who do not qualify for government assistance, yet pick many of our grapes and work in many of our restaurants). With both of these funds, 100% of our donations go directly to fire victims.

Larry Luttrell
@ Nov 5, 2017 at 2:10 PM
http://www.yourdriverinnapa.com
Very nice article on explaining smoke taint, thanks you. Hope all is well with you and the family.