Olive oil can be really confusing! For example, what's the difference between "Olive Oil" and "Extra Virgin Olive Oil"? And why do some oils cost $20 per gallon, while others are $40 for a mere 375milliliters (twice the price for one-tenth the volume)? Which oils should be used for what foods anyway? And why should olive oil be used to begin with? In a short amount of space, we'll try to demystify olive oil by addressing these common questions.

Culinary olive oils range in quality from Extra Virgin Olive Oil (the best oil with distinct flavors) to Virgin Olive Oil to Olive Oil. Extra Virgin Olive Oil (EVOO) is mechanically pressed at cold temperature which allows the oil to express its natural fruity, herbaceous, and peppery flavors. After this first cold press, heat may be applied to the olives in order to extract even more oil albeit of lower quality, and this is typically called Virgin Olive Oil. When chemicals are applied to the olives, it yields the highest volume and lowest culinary grade, Olive Oil (sometimes called Pure Olive Oil), which works well for sautéing but doesn't have much flavor. This grading system, developed by the International Olive Council, is quite clear—the only problem is that the United States does not enforce these definitions, so olive oils that could never be sold as Extra Virgin in Italy can be imported into the United States and sold as EVOO. So much for clarity! The lesson to be learned is that you should only purchase EVOO from a producer you trust.

"Cook with pure, and toss with virgin" is our mantra for determining which olive oils to use when. If olive oil is to be used at room temperature in a situation which highlights its flavor—for example in a vinaigrette for tossed salad, dipping with bread, drizzling on grilled vegetables, finishing off a soup—an EVOO should be used. If you are cooking with a lot of heat or in a situation where other aggressive flavors will cover it up—for example, braising meat, frying fish or eggplant, making tapenade—olive oil is good enough. Our culinary expert, Gloria DeMaria, says her favorite cooking olive oil is Bari's Extra Fine Pure which is a blend including 40% extra virgin olive oil. And can you guess her favorite EVOO?

Extra Virgin Olive Oil is typically quite expensive, but then again, one uses much less of it. Yields on EVOO are quite low—much less oil is produced from the same weight of olives compared to Olive Oil or even Virgin Olive Oil. In addition, picking olives for EVOO is typically done by hand, and at Montemaggiore that involves walking up and down our steep mountainside. Picking olives by hand can be upwards of ten times more expensive than machine harvesting, but it yields a much higher quality oil. Although EVOO may seem expensive, we consider it one of those affordable luxuries. A single taste will tell you that EVOO is worth its weight in gold! 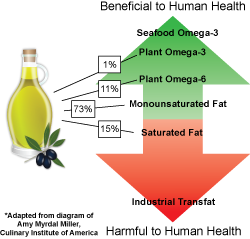 For those of us who are trying to eat healthier, olive oil has been a great substitution in our diet. Vincent grew up with olive oil, but Lise's family (from northern Europe) typically used butter. It has taken her some time, but now she's a convert! Health experts tell us that substituting olive oil for butter in our diet lowers cholesterol by increasing the HDL (high-density lipoprotein, or good cholesterol) level and reducing the LDL (bad cholesterol) level—thus reducing risk of coronary artery disease. All because olive oils have very high levels of monounsaturated fats (EVOO is 65-85%). Unfiltered EVOO is also high in anti-oxidants, but that's a whole other discussion.

One of our favorite ways to use olive oil is in "finishing" a dish with a drizzle of EVOO. The flavors of soups, grilled vegetables, pizza, fish, and flatbread just seem to "pop" with that small addition of oil just before serving. EVOO can elevate a dish from mundane to extraordinary because many flavors reach your tongue and nasal passages only when carried by fat (remember that "taste" is really a combination of taste and smell). If there is no fat, the flavor doesn't get released. This addition of fat also allows flavors to be perceived or sustained over a longer period of time. Without getting too technical, fat is known as a nonpolar solvent (unlike water which is polar). Some flavor compounds are polar and are soluble in water, but many are nonpolar and insoluble in water. In order to really bring out the flavor of the nonpolar compounds, they must be dissolved in a nonpolar substance…that is, fat. Alcohol can also dissolve many nonpolar compounds, and perhaps that's why wine can make food taste better too!

EVOO is good for you and boosts flavors in your food, but not all EVOO is the same—like wines, Extra Virgin Olive Oils vary dramatically in taste depending upon the variety and quality of the fruit that is pressed, the time of harvest, the region from which the olives were produced, and the weather during the growing season. We hope you will have the chance to taste Montemaggiore EVOO, compare it to others, and decide which are your favorites.