Recently I saw a movie trailer that really spoke to my experience “on the farm” at Montemaggiore. I’m no movie expert (although Lise does count on me for all the movie trivia in the New York Times sunday crossword puzzle) but I’m really looking forward to seeing The Biggest Little Farm when it comes out in April. The trailer depicts a young couple escaping the city to grow vegetables, produce fruit, and raise livestock in Ventura County, (southern) California. In so many ways, their story reminds me of our experiences in Sonoma County, (northern) California. 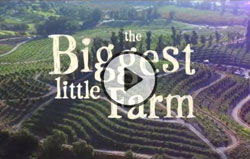 Ten years earlier than this couple, Lise & I set out on a grand adventure to follow our dream. Fueled more by beliefs than knowledge, we longed to leave the urban/suburban environment; grow grapes and olives; share our wine and olive oil with others—and raise a family along the way. We wanted to live amongst the trees, the vines, the wildlife. I wanted to breathe fresh air every day, farming in harmony with nature the way that my father had 50 years ago in Montemaggiore, Italy. We were prepared to learn a lot but we weren’t expecting the roller coaster of hilarious, heart-warming, life-affirming, and soul-expanding experiences.

When we first moved to the property, our vines looked like scraggly twigs plunked down in a vast, dirt moonscape. There was little greenery and no other life—no bugs, spiders, weeds, ants, birds—in great contrast to the surrounding verdant forest. How could I bring life and balance back to the vineyard? We knew we wanted to farm organically because our house was amongst the vineyards, after all who would want to breathe all those chemicals typically sprayed on crops?; Our drinking water came from our property, so we didn’t want chemicals leaching into our watershed.

We soon heard about Biodynamics, which I recognized as my father’s farming technique passed down through the generations in Italy. By integrating farm animals and paying close attention to soil fertility, we felt Biodynamics was the key to bringing life back to our vineyard, achieving better balance on the property, and creating truly exceptional wines. So I started down the multi-year path of learning, adapting, and becoming certified.

Keeping Elements of Nature in Balance

One of the fundamental tenets of Biodynamics is to nurture the many interdependent elements of nature: crops, forests, plants, animals, soils, compost, people. Our first experiences felt more like “us against them”, humans versus the other elements of nature. But I quickly learned that creative thinking can make all the difference. A farm problem means that some element is out of balance, and often another element of nature can be mobilized for the good of all. I learned to dig for a problem’s root cause and leverage nature to put everything back in balance. Over the years, we had many, many surprises. Most of them good and many of them… opportunities to learn.

When we moved to Sonoma County, one of our first surprises was the abundance of snakes on the property. Not just harmless garden or gopher snakes, but Northern Pacific Rattlesnakes—you know, the venomous kind—the kind that sends you to the hospital (which hopefully stocks anti-venom). The great thing about snakes is that they eat rodents but…

Of course the bad thing about rattlesnakes is that they can bite you, your dog, your vineyard workers, or your very young (and only!) child. In fact, our immensely curious dog named Zeppli was our first (and only, thank goodness) victim. After a 2 day stay and a very large bill from the 24 hour Vet Hospital (of course, the bite occurred on a Sunday night), Zeppli recovered nicely. While we were contemplating what to do about the snakes without poisoning our free-roaming dog, Zeppli was bit again by another rattlesnake! Okay, so he wasn’t the smartest—but he was the most perfect dog in every other way—and he chased away the wild turkeys, preventing them from eating the ripe grapes (aside: see what I’m saying about leveraging nature? )

Getting back to our snake problem, how do you get rid of the rattlesnakes on a large property? (drumroll please) Cats! The cats won’t kill the snakes directly, but the cats will kill all the mice! And snakes are very lazy thus will only stay where there is abundant food. We soon acquired two adorable 8 week old kittens, a brother-and-sister mouse-killing and snake-discouraging team. Within several months, our rattlesnake sightings went down from about 20 per year to about 3 over a total of 10 years. Only the vineyard workers were disappointed because they loved making BBQ snake tacos for lunch (demonstrating why we call rattlesnakes venomous and not poisonous).

Bringing Animals and Plants Together

The next battle we had, and unfortunately lost, was over chickens. Another fundamental tenet of Biodynamics is to bring plants and animals together. Farms that only grow crops or only raise livestock may be more efficient by some standards, but also create imbalances—nutrient deficiencies come from only growing plants and pollution associated with excess manure comes from only raising animals for example. Biodynamic farms bring plants, animals, and soil together so that they each support and balance the whole. Our primary intent was to farm grapes and olives, but what animals made the most sense to increase soil fertility? I considered sheep, goats, cattle—but ultimately, I decided to start small, with chickens.(spoiler alert: we should have started larger) 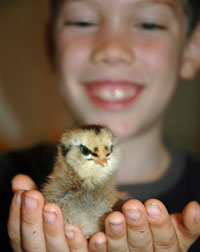 Chickens would provide our family with fresh eggs, eat bugs in the vineyard, scratch around the vines to keep the grasses down--all the while improving the soil fertility with their manure (which is considered the best amongst farm animals). I purchased chicks of five different types, chosen for the colors of their eggs: blue, green, brown, and white. After a few weeks, the chickens were let out in the vineyard to do their job. They slept overnight protected from the elements in a mobile chicken coop that Paolo and I built as a replica of our winery (including the bronze and copper door). A solar-powered and solar-activated system opened the door as the sun rose, releasing the excited chickens out into the vineyard (without requiring us to get up early). They quickly learned to get back in the house before the door automatically closed as the sun set.

Initially the chickens were everything we imagined, and even more so because they proved to be very entertaining! (aside: “rule the roost”, “pecking order”, “hen-pecked”, “hen party” “Mother hen”—all these phrases came to life before my eyes.) Most importantly, our flock did their job both delivering and spreading manure. They ate the cutworms and cane borers, which destroy new buds on the vines and even kill entire grapevines. Our vineyard began to look and smell like a farm (in a good way). My “girls” would come when I whistled, and Paolo got a kick out of carrying them around. We had more eggs than we could ever eat, which made our friends and neighbors very happy. But after about six months, I started losing them.

One hen would disappear every few days, leaving only a few feathers as evidence. What animal could climb the six-foot vineyard fence designed to keep away deer? Perhaps we had raptors? But the chickens had lots of overhead cover amongst the vines. My first approach was a big rooster to protect or at least warn the hens. A friend wanted to get rid of a rooster (aside: female livestock are much more valuable than males!)—so Pavarotti joined the flock. He was named for his constant crowing, and his way with the girls. But Pavarotti just announced his presence to all the wildlife, and sadly, he too was history.

My next approach was electronics (please, no comparisons to Wile E. Coyote). I put the hens inside electric fencing (which was inside the vineyard fence), encompassing a large enough area that they could still roam. Unfortunately, that didn’t help and I started losing one chicken per day 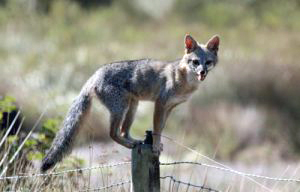 Grey foxes are the only type in our area that can climb trees—or in our case, wooden fence posts. Replacing all the wooden posts surround our 10 acre vineyard didn’t make financial sense. I considered building a large coop, keeping the chickens enclosed both day and night—but the whole idea was that they roam the vineyard, not just live inside a cage. My next approach was to “fight” one animal with a larger animal. We had several sheep, along with a really large ram, and they might deter the fairly diminutive grey foxes. We put the chickens and their house in with the sheep, but to no avail. Perhaps a guard dog or a guard llama. Ultimately, we decided to concede the battle. Our small 10-acre vineyard was amongst hundreds of acres of wildland. It just didn’t make sense.

We’ve had many, many adventures over the years with the sheep, skunks, and peacocks. Oh, and let's not forget the mountain lions, scorpions, and fisher cats. We have so many memorable moments that will have to wait for another newsletter. In the meantime, if you want to learn more about sheep in the vineyard in general, Tablas Creek (another Biodynamic vineyard) has a great video. And we look forward to reliving more memories while watching The Biggest Little Farm when it comes out in a couple months!