The Optimal Time of Harvest

While Vincent calls the shots in the vineyard, Lise (the winemaker) determines when to pick the grapes. And choosing the right time to pick is not only a winemaker's first decision, but arguably her most important! Ultimately, it's a subjective decision. While most people could agree when grapes are underripe (they taste like grass) or overripe (they look like raisins, and in fact, they are), a winemaker primarily uses her tastebuds to determine when to pick, taking into account varietal, wine style and past experience. 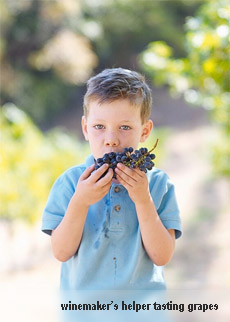 First we must explain that Lise doesn'tuse a very common method called "picking by the numbers". Metrics as sugar level (Brix) are objective and easy to assess which is why larger and non-estate wineries often use them to make picking decisions—but we don't think they tell the full story. In California, reaching "sugar ripeness" is rarely a problem, but the critical phenolic (tannin and flavor) ripeness often comes later—and is best assessed by taste.

For Montemaggiore's Syrah and Cabernet, the flavor of the skins and the ripeness of the seeds are critical. We want the skins to be full of fruity, jammy lusciousness without any green, vegetal flavors. We look for the seeds to be brown indicating that the tannins are mature, and we want the pulp and skins to have a fullness or richness of flavor. Lise ends up chewing a lot of grape skins and seeds in order to determine the peak of ripeness!

Wine style also plays a significant role in determining when to pick the grapes. For example, with the fruit-forward elegant style of Montemaggiore, we tend to pick our Syrah on the riper side to get all those blackberry, black cherry, and blueberry flavors we love. If we wanted a leaner, less opulent style Syrah, we might pick a bit earlier. If we sought a highly-extracted fruit bomb we might pick a bit later.

Given the past five vintages with the same vineyards, we recognize the flavors in our vineyard's grapes that lead to certain flavors we desire in the wine. Since we live among the vineyards, we also know how different areas progressed throughout the 2007 growing season: which vines flowered first, and which reached verasion (turned from green to red) first. This helps us narrow down which areas in the vineyard should be riper than others—helping to simplify the time-consuming task of tasting grapes.

Since our season typically consists of five micro-harvests (around four tons each), Lise and her helper (see photo above) taste a lot of grapes to determine the exact boundaries of the areas in the vineyard which are at the peak of ripeness.