“Pepper”, “leathery”, “hints of cocoa”... do you find wine descriptors to be helpful? Or just intimidating and mystifying? Wine aromas are wonderfully complex, which is the main reason most of us enjoy wine. At the same time they are frustratingly complex—aromas can appear and then disappear, and you may not smell the same aromas as someone else... ever! We’d like to explore that magical, mystical world of wine aromas by focusing in on the “pepper” aroma commonly found in Syrah, the varietal we specialize in here at Montemaggiore. 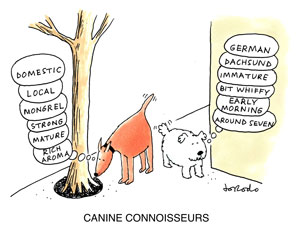 Part of the reason wine aromas are complex is that different varietals have different aromas (cabernet smells much different from pinot noir)—but even the same varietal can have different aromas depending on the climate in which it's grown (syrah from a warm region of Australia smells different than syrah from the cool northern Rhône). Perhaps most intriguingly, the aromas in a single wine change, over years spent in the bottle and even over several minutes in your glass. All this makes it difficult to pin down aromas.

Another part of the complexity stems from the fact that humans are not very good at detecting and describing aromas. Humans can easily identify and describe most things we see with our eyes: “pink”, “round”, “fuzzy”, “3 inches in diameter”—a good visual description of a peach, but how would you describe what a peach smells or tastes like? Hmmm... much more difficult! Humans brains are just not wired for smell, probably because our lives rarely depend on the smell of something. Bears’ brains are one third the size of ours, yet the part specializing in smell is five times larger—they can smell food over 2 miles away. The good news is that with practice, you can get better at identifying and describing aromas—assuming you want to!

Did you know that all humans don’t necessarily even smell the same things? We each have different thresholds for detecting individual aromas, and some people are very sensitive to certain scents. On the other hand, some people don’t smell individual aromas at all! Wine can exhibit more than 700 different aromatic compounds—all with different concentrations. Most aromas don't originate from a single aromatic compound, but instead come from different combinations. So what one person smells and tastes in a wine could be completely different than what you do.

The defining aromas of Syrah 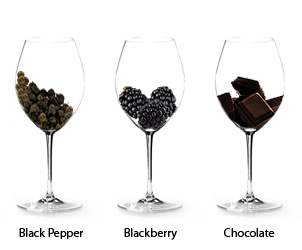 Many varietals have distinctive sets of aromas, which provides an interesting recognition exercise to wine tasters. Typical Syrah aromas include pepper, spice, blackberry, blueberry, cocoa, cured meat, bacon fat. Contrast this with typical Cabernet Sauvignon aromas of black cherry, tobacco, and bell pepper. Despite the commonalities, aromas of Syrah from a cool climate will lean toward the spice, pepper, cured meats while those from a warm climate will lean toward the blackberry, blueberry, cocoa. In an older Syrah, the aromas will tend less towards the fruit and more towards the spice. And what can happen to a Syrah that sits in your glass for 15 minutes? Lots of wonderful things!

Perhaps the single most defining aroma for Syrah is “pepper”, and by this we mean black and white peppercorns (not sweet, bell or hot pepper). [FYI: white pepper is the inner seed of black pepper] Many critics describe high quality Syrahs as having peppery aromas, especially those from cool climates. This aroma doesn’t come from the winemaker steeping the wine in peppercorns, rather from the grapes themselves. The chemical compound responsible for this pepper aroma is called Rotundone, which was isolated in grapes and wine only recently, in 2008.

Rotundone is found not just in wine, but in the grapes themselves

Rotundone (ro tun DUN) is a particular type of chemical compound called a sesquiterpene. Syrah is the varietal richest in sesquiterpenes, which tend to have woody, spicy characteristics (their cousins, monoterpenes tend to have floral, herbal characteristics). Not surprisingly, Rotundone is the key aroma compound of peppercorns, and also found in marjoram, oregano, rosemary, basil, thyme, and geranium. In the world of grapes, rotundone imparts a peppery and spicy aroma not only in Syrah, but also in Mourvèdre, Durif and the white Gruner Veltliner.

Rotundone originates from the grapes themselves, and in fact is one of the few aromatic compounds that can be found directly both in the grapes and in the resulting wine. Given their focus on Syrah (or Shiraz), its not surprising that Australians have been leading the charge on rotundone research. They have found that rotundone accumulates mostly on the skin of the grape, beginning at verasion (when the grapes turn from green to red) and continuing through even advanced stages of fruit maturity.

Rotundone levels are generally increased in cooler vineyard sites and during cooler vintages, thus both the vineyard terroir and the farmer’s viticultural practices affect its concentrations. Since Rotundone is found more in hillside grapes than in flat areas, Montemaggiore’s vineyards are prime candidates for “peppery” Syrahs—which has definitely been our experience. Given that 2015 is an earlier year and verasion happened earlier, the temperatures between verasion and harvest will be higher. Thus we would predict that 2015 would be a vintage of less rotundone in northern California syrahs. 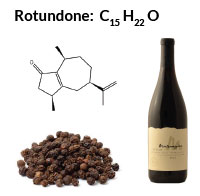 Like many aroma and flavor compounds, some people aren’t able to detect rotundone at all. In one study, 20% of the subjects could not detect any rotundone even at very high concentrations. This proves that two people can completely disagree on what a wine smells like—and both be right! So certainly don’t worry if your impression of a wine differs greatly from a particular wine critic’s—although you might question the validity of wine descriptors in general. And as for those wine snobs who dissect a wine and spout off a litany of obscure adjectives, perhaps now you can quiet them by asking if they detect any Rotundone!