Drought and Wine at Montemaggiore

No doubt you’ve been hearing about the drought in California, perhaps even 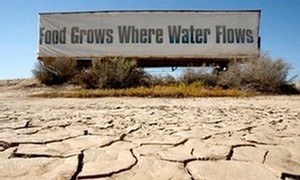 seeing the distressing pictures of dried up reservoirs—so you may be wondering how we are effected here at Montemaggiore.  Luckily our water supply is secured, at least for this year.  Our vineyards are irrigated from ponds on our property that gather rainwater over the winter.  Although our rainfall was much less this year (26” compared to a more typical 40”+), this was enough to fill our ponds.  In the long-term, our situation remains uncomfortable and the issues for grapegrowers in general are sobering.

Unfortunately 90% of California’s rain comes during the six-month period between November and April, the exact wrong time for grapes which need water during the growing season from March to October.  Some vineyards can be “dry farmed” when the vines’ roots have access to water from an underground aquifer.  In our case, being on a mountainside with no subsurface aquifer, our vines are irrigated from ponds that gather rainwater.  Most vineyards, however, are irrigated using water pumped from aquifers.  We are lucky that we have our “own” secure source of water, and that our ponds usually fill up by January 1st, after the first or second big rain. 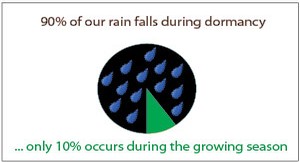 The primary disadvantage of Montemaggiore’s water situation is that we can’t simply access more water during hot summers or drought years because our ponds are barely large enough meet our needs.  Grapevines are a permanent crop —we can’t decide on a year-by-year basis whether to grow grapes, unlike a broccoli farmer who can let a field lay fallow until the drought ends.  A vineyard costs up to $75,000 per acre to plant and requires four years to start producing, thus one wouldn’t want their long-term investment to “dry up” because the vineyard wasn’t irrigated one year.  So once a vineyard is planted, you really want to keep giving it sufficient water.

As an aside, at Montemaggiore we also have to worry about water for our olive trees and olive oil production.  Olive trees also like to have water over the growing season (March through November), however, they can survive without any water at all in our climate.  The trees won’t produce a decent crop of olives without summertime irrigation, but they will survive to the next year.  So we can cut back or cut off water completely on our olive trees and just loose single year’s crop, even though we can’t for the grapevines.

2015 is the fourth year of drought in California, and the past two years have been especially scary for us, but for different reasons.  The rain in 2015 all came early, in December and January.  Our ponds filled up quickly, but as we are now entering the summer, we worry about whether we’ll have enough water to last throughout the growing season because our soils are dry.  We really want the last big rain to be in March or April, because we can start irrigating later, using less water overall throughout the year.  Because our last big rain was in January this year, we’ll have to start irrigating in June whereas normally that would be July or even August.  So we’ll be irrigating for 4-5 months instead of just 2-3 which means our vineyards will require much more water this year.

2014 was perhaps the most nerve-wracking year for us, water-wise, because all our rain came very late in the spring (although we received about the same total amount).  We spent the entire winter worrying whether our ponds would ever fill up.  After no significant rain, we purchased crop insurance in February, and started planning which grapevines would be sacrificed, and whether we should re-prune our vineyards to cut down on the canopy (“greenery”). Eventually, the rains came in March and our worrying was for naught.  The summer was fairly mild, so we didn’t have to use a lot of water.

Even though summers are dry, our wines are still affected by winter drought.  The spring is generally warmer and sunnier, thus the grapevines come out of their winter dormancy sooner, shifting the whole growing cycle earlier.  The grapes may have elevated sugar levels because they accumulate sugar during the hottest month (August) instead of during a later, cooler time (September).  Flavor ripeness, Lise's determinant for harvest, is much less affected.  If sugars get ahead of flavors, the resulting wines are in danger of being thin, tannic, and "alcoholic". Thus we need to keep our vines hydrated and delay harvest into the cooler part of the season—keeping the wines in balance.

In case you were wondering, grapevines in general are fairly efficient users of water.  If you were to group all California crops into 20 categories and rank them based on their water needs from “best” to “least”, vineyards are ranked: 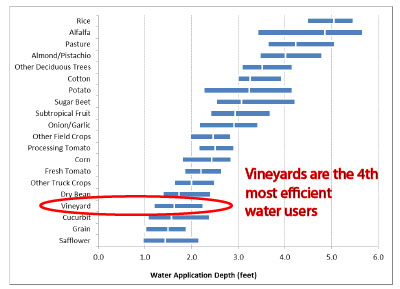 At Montemaggiore, our irrigation practices are quite efficient.    Like most vineyards in our area, we use a drip irrigation system which pinpoints the water application to each specific wine thus doesn’t waste water. Unlike most vineyards, we intentionally give our vines less water than they would ideally like, in order to reduce the size of the grapes and improve wine quality.  So when you look at our grapevines in August, they will look a bit scraggly—not lush and green like you would expect to see in a nice garden.  As I like to say, “we want our grapevines to struggle, but not suffer”.

When we do irrigate, we only irrigate the specific vines that need water, and only exactly when they need it.  Because we live in the middle our vineyards and work amongst the vines every day, we irrigate only when we see the vines suffering. We can turn off the water on individual rows, and only irrigate to specific vines within a row.  Most winegrowers irrigate entire blocks of 1000-5000 vines on a pre-set schedule.  Thus on the whole, we consider ourselves to be fairly responsible consumers of water.

The wider picture is grim

Drought brings considerable indirect danger to our vineyard, and other winegrowing areas in the state.  We constantly worry about fire, with a lot of dry brush on our 55 acres.  Some of our beautiful native trees like madrones are very sensitive to changes, thus many die during our droughts, leaving even more fuel for fire.  At least our area still receives a 25"+ of rain each year whereas many winegrowing areas south of us receive much less.  With only 10” of annual rainfall on average, the Central Coast region around Paso Robles has experienced a massive draining of ancient aquifers and the drying up of wells—critics say due to excessive vineyard plantings.  During the summer of 2014 alone, the land in the San Joaquin Valley subsided up to 10 inches due to the draining of aquifers. 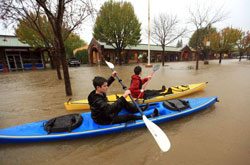 Ironically, in Sonoma County we still have severe flooding in drought years!  We haven't suffered to the extent as Texans with their recent drought-ending rains but this past December Healdsburg received 6” of rain in 12 hours.  We had a good laugh with the kayakers downtown, but the mini-landslides on our property were more depressing.  Some experts are predicting an end to California's drought this upcoming winter due to a building El Niño.  We cross our fingers for above-normal yet broadly-timed rainfall this winter—but sometimes Mother Nature has a strange sense of humor!

"Update on Regulations to Manage Groundwater Quality and Quantity" by Thomas Harter of the University of California, Davis.  Given on 2/13/2015, this talk presents fascinating and thought-provoking data on groundwater and agriculture in California.