The harvest season is upon us here in northern California, and at Montemaggiore we are really excited to get started! Being focused on red wine, we start a bit later than most wineries, probably in late September this year and continuing for about six weeks. Crush creates intense emotions because during this short period of time, we humans have our largest impact on the entire vintage (Mother Nature calls the shots during the growing season). Many of you have been lucky enough to visit our winery during this exhilarating time, but for those who haven't we figured you might appreciate an inside look!

In a winemaker and grapegrower's life, there is nothing more exciting and scary than crush. For Lise, as the winemaker, the decision of when to harvest the grapes is the most important and irrevocable decision she makes! Her emotions can jump from anticipation, to anxiety, to thrill—and towards the end, a dose of exhaustion. For Vincent, on the other hand, a tremendous sense of satisfaction and relief comes over him. As the grape grower, he sees the fruits of his hard labor safely in the winery and his job complete. But harvest can also be tremendously nerve-wracking—last year, rain during harvest caused us to worry about bunch rot, botrytis and split grapes. Although the 2012 season has been picture-perfect thus far, anything could still go wrong. And we would never sell bear skins... 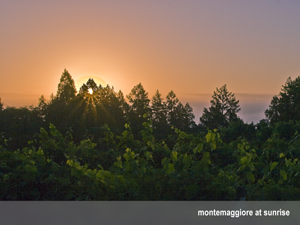 The most fun and exciting time during crush are the days we're actually picking grapes. Prior weeks of tasting grapes throughout the vineyard finally prompts Lise, the winemaker, to decide that an area of grapes is will be at its peak of ripeness within the next 2-3 days. Measurements such as sugar, acid and pH in the ripening grapes inform that decision, but the flavors of the grape skins are Lise's primary determinant of when to pick. The day prior to harvest, Lise will delineate the exact area to be harvested by surrounding it with yellow "caution" tape (Vincent says it looks like a crime scene).

As the sun rises, typically around 6:30am, our small crew emerges from the darkness to pick the grapes while they are still cool. Other vineyards might be picked at night, but we always pick during daylight because our steep mountainside can be dangerous. Harvest is only time we hire a crew, typically four additional people, which are often augmented by our crew of gringos (friends and Wine Club members who want to join in the excitement). Pedro drives the tractor into the vineyard with two half-ton bins on the back. The crew carry their lugs and picking knives into the vineyard, hook the knives around the stem of the grape bunch and drop the bunch into the lugs. When the lugs are full (~40 lbs), they are tipped into the half-ton bins. When both half-ton bins are full, the grapes are brought up to the winery. After all the designated grapes are picked, we take a break for lunch (typically around 10 or 11am). 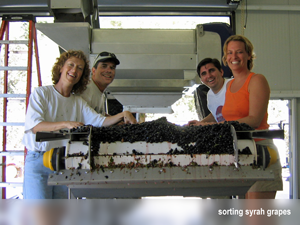 Once the grapes are harvested for red wine, we destem and sort them, then put them in a stainless steel tank—all by the mid-afternoon. Using the forklift, Vincent steadily dumps the grapes from the half-ton bins into the destemmer, which quickly but gently separates the grapes from the stems. Montemaggiore's destemmer is especially designed to destem without crushing, which allows them to ferment "whole berry" (thus retaining many of the fruit flavors in the wine). This special design also allows us to sort through the whole grapes at this point, tossing out stem pieces, underripe or over-ripe grapes, and earwigs (!). Two to three people stand on either side of the sorting table (a long slow conveyor belt) tossing MOG (material other than grapes) onto the floor. The destemmed and sorted grapes either fall into a fermentation bin or are pumped into a stainless steel fermentation tank. Cleanup then takes another 2-3 hours, and we're finished by 5pm.

For white wine, after the grapes are harvested, they are immediately pressed that very same day. Vincent carefully dumps the grapes from the half-ton bins into our bladder press. A balloon-like bladder inflates to press the grapes against a screen to extract the juice. This unfermented juice is then put into neutral French oak barrelswhere they ferment over the course of 3-4 weeks in our cold barrel room. For red wine, the press days occur at the end of the 2-3 week fermentation, and we use a very slow, gentle basket press—after which the fermented wine is put in a combination of new and neutral French oak for aging. 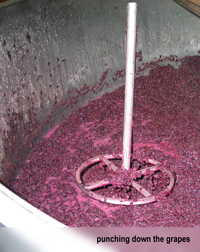 Most of the days during crush are not as exciting as harvest days, but perhaps are more important. They are spent sampling and caring for the fermenting red and white"must". Each red fermention tank must be"punched down" to keep the flavorful skins in contact with the juice, typically three times a day for a half hour each. When all five tanks are going, that's 7.5 hours of cardio-vascular exercise for Lise. White wines don't require punchdowns because they're not fermented with the skins, but a fermenting barrel of white wine must be stirred daily to keep the yeast in contact with the juice. Every morning, from each fermentation vessel, Lise takes a sample of the juice, tastes it, and tests the temperature and sugar level. If she detects off-flavors in the wine, sees temperature spikes, or determines that the fermentation is going too fast or too slow, she might have to take remediating measures such as heating or cooling a tank, adding yeast nutrients, or oxygenating the wine.

By late mid-November, the crush has usually ended. All the wine has fermented to dryness and rests safely in barrel. Finally, we are allowed to celebrate both our birthdays along with our wedding anniversary, which typically gets all but ignored during this intense, nerve-wracking, and thrilling time called "Crush".