Fermentation: the key to unlocking Flavor

If you've ever had the opportunity to taste the grapes from which a wine was make, you might be amazed to realize that grape juice has no aroma and doesn't taste anything like the resulting wine! So how is this nuanced, complex wine actually created? A microscopic single-celled workhorse, yeast, is responsible for unlocking flavors from the grapes during the fermentation process—and creating the tantalizing elixir we all know and love. I consider fermentation to be the second most important factor in wine quality beside the grapes themselves. Since we're just embarking on our 2013 fermentations, I thought you might be interested to get a glimpse of what's happening inside the winery.

Fermentation is a complex chemical chain reaction initiated by microorganisms (yeast or bacteria) turning sugar (really any carbohydrates) into alcohol (or acid), while giving off gas and heat as by-products. Before refrigeration, fermentation was the only way to extend the life of perishable foods. The beneficial microorganisms beat out the kind that can kill you, eating up the carbohydrates in the food, resulting in a myriad of interesting flavors, textures, and aromas. 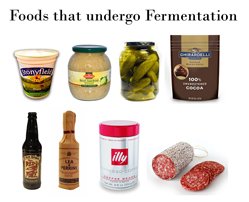 Many foods are created by fermentation including yogurt, sauerkraut, pickles, beer (obviously!), cheese, and kambucha. You might be surprised to learn that even chocolate, coffee, and salumi go through a fermentation process to improve their flavor and texture. Since Neolithic times some 6000 years ago, humans have been fermenting beverages although the process wasn't really understood until Louis Pasteur came around in the mid-19th century. Today, fermented foods are enjoying a bit of a renaissance because they can improve digestion, aid friendly bacteria in your gut, and increase nutrient absorption. Is that why we drink wine?

While we won't bore you with a detailed chemical or microbiological explanation, suffice it to say that when it comes to wine, fermentation is a very complex and challenging process fraught with risk. For example, although yeasts produce both heat and alcohol, they don't really like either! If yeasts are too hot or too cold (they prefer 65-85F) they become unhappy and die. Yeasts are also unhappy when they have too few nutrients or maybe even too many—then they produce off odors like hydrogen sulfide (akin to rotten eggs). Amazingly, although they produce it, ethanol is toxic to yeast! A winemaker's only hope is to build up such a massive population of yeast early in the fermentation (when the juice has little or no alcohol) such that although huge numbers die as the alcohol increases, enough remain to complete the fermentation.

A winemaker's nightmare occurs when all the yeasts die before their job is done, which is called a stuck fermentation. Restarting a stuck fermentation can be rather difficult. Remember yeast don't like a lot of alcohol and the must (the thick liquid of with skins, seeds, and pulp which is neither grape juice nor wine) probably contains quite a bit. If the fermentation isn't restarted quickly or effectively, the "wine" can spoil due to oxidation and bacteria. And given that the yeasts were probably fairly unhappy (after all, they did die), they probably produced some off-flavors along the way. I remember my first Viognier fermentation back in 2009 when I had to re-start the fermentation not just once, but twice (luckily with few side effects). Winemakers obsessively monitor the fermentation by making sure the sugar is being consumed by the yeast, checking the temperature, all the while smelling and tasting for off flavors. Only when all the sugar has been consumed, can the winemaker finally breathe easier.

Actually fermentation isn't all about nightmares, rather it's a wonderful opportunityfor a winemaker to shape a wine's texture, intensity, and flavor. During fermentation, grape skins and seeds macerate in the juice thereby giving up tannin, color, and flavor compounds, which is encouraged by heat (think: cooking) and alcohol (think: solvent). Since different compounds are extracted under different conditions (alcohol level, temperature, length of time), a winemaker determines the wine's style by making many important decisions including: 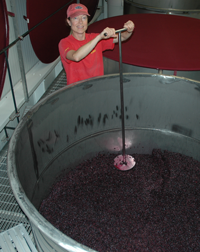 Now let's take a closer look the fermentation process that I designed for Montemaggiore's Syrah. Our fermentations are performed in small, open-top stainless steel tanks which can be easily heated or cooled. The fermentation process starts with a 4-day cold soak at 55°F to extract flavor precursors. As the tank heats up, native yeasts start the fermentation. At this point, the tank is punched down by hand once a day for one half hour (see photo on left). Each day, the temperature and sugar level of each fermenter are recorded. After a few days, I add a cultured yeast for purity of flavors and aromas. At the most vigorous part of the fermentation, I'll punchdown three times a day for a half-hour each. I aim for a maximum temperature of 85-88°F as early as possible in the fermentation. I prefer longer fermentations, typically 10-14 days, with time to extract different compounds at different temperature and alcohol levels. I press upon dryness, and don't perform an extended maceration because I like to retain the fruit flavors. I've experimented with many different variations on this process, and "the recipe" is definitely tweaked for different vintages and even sections of the vineyard, but the basics are the same.

Now we hope you understand a bit about fermentation, and the conditions which turn Montemaggiore's mountainside grapes into an elegant, fruit-framed, rich Syrah!