Fine wine spends most of its life touching oak—in the bottle sealed by a cork (the bark of an oak tree), and of course, maturing in oak barrels prior to bottling. At Montemaggiore we could argue that even our grapes are influenced by oak given that our small vineyards are surrounded by deep forests of black, white, and coast live oaks—but we digress. Oak barrels have a profound flavor and structural influence on wine, second only to the grapes themselves. And although you should never overtly taste oak in Montemaggiore wines, you should understand our perspective on oak barrels.

Let's start with a bit of history. Oak barrels were originally used purely for transporting wine—a vast improvement over odiferous animal skins and fragile clay amphorae. The earliest records show Iron Age communities (800-900 BC) in northern Europe using wooden barrels for the large-scale transport of wine, beer, milk, and water. Over the ages, the use of oak barrels as a convenient transport and storage mechanism spread throughout Europe and the Mediterranean region. As wine was transported more frequently and over longer distances in barrels, customers began to appreciate their wonderful flavors and aromas thus winemakers started deliberated maturing wine in oak. 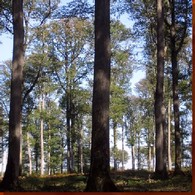 Today, we winemakers debate which forest, cooper, grain, drying time, and toasting level makes our wine exactly perfect! At Montemaggiore we use only oak from France, "the gold standard". Other sources include Eastern Europe, Germany, and Portugal. American oak is also quite popular, although stylistically very different (imparting intense, spicy vanilla aromas) primarily because it comes from a different oak species—quercus alba as opposed to the quercus robur and quercus sessiliflora found in Europe. American oak barrels are much less expensive than their French oak counterparts ($400 versus $1,200) because quercus alba is easier to split and yields more barrels.

Each year, Lise purchases around ten new oak barrels from 3-4 French coopers. Typically she specifies tight grain wood, coming from more northern (cooler) French forests where the trees grow more slowly. The tight grain leads to a more elegant wine, imparting its flavors more slowly as Montemaggiore wines mature for 18-24 months in barrel. To make a barrel, each cooper purchases specific trees from federally-managed French forests, then splits the wood into staves and dries the staves for 2-3 years. Some coopers kiln-dry the staves, but we like staves to be seasoned outdoors for three years which leaches more tannins from the wood, resulting in a softer, finer finished wine. Our favorite coopers include François Frère, Saury, and Taransaud.

After the oak staves are dried, the cooper bends them over a fire to both shape the barrel and toast the inside. During toasting, temperature and fire intensity along with exposure time are closely monitored—and each cooper's technique produces very distinctive sensory characteristics. Toasting is a complex art which radically changes the physio-chemical composition and structure of the wood by breaking down "wood sugars" on the surface. Every cooper offers similar toasting levels of light, medium, medium plus, and heavy—but each cooper's barrel at these different levels is completely different due to their toasting methodology. Lise orders several toasting levels, but predominantly Medium Plus.

The flavors that oak barrels can impart on wine include wood, vanilla, coconut, caramel, spices, toast, and smoke—which come from compounds with such tongue-twisting names as lactones, phenolic aldehydes, and terpenes. Winemakers mature wine in barrels not only for their flavor but for several other reasons. Evaporation through the side of the barrel concentrates flavors, creating greater depth and richness (an effect similar to when a chef "reduces" or cooks down a sauce). Oxygen is admitted enabling the wine to breathe in a controlled manner. Barrel maturation also improves the clarification, color, stability, mouthfeel, and ageability of wine.

When specifying barrels in which to mature a particular wine, the winemaker typically tries to balance oak influence with the natural flavors and structure of the grapes. Most fine wines mature in a combination of new oak barrels and neutral oak barrels. Neutral oak barrels are those that have already been used for 3 or more years, imparting little if any oak flavor (although they do provide the other benefits). Montemaggiore Syrah typically matures in 25% new oak, meaning that one fourth of the barrels are new and 75% are neutral. We like a relatively low percentage because the delicate flavors of our Syrah can be easily overwhelmed by excessive new oak. Our Nobile typically matures in 50% new oak, because the Cabernet appreciates a more aggressive oak regimen. Neither our 3Divas nor Rose sees any new oak, although they are fermented and stored in neutral oak barrels.

Given the high cost of oak barrels, many "oak alternatives" such as oak chips and planks have become available in recent years. At a fraction of the labor and product cost, winemakers can add oak chips and planks to a stainless steel tank of wine (for flavor) with oxygen slowly bubbled through (for oxygenation). At Montemaggiore, we would never use "oak alternatives" in place of maturing our high quality, artisan wine in barrels—we're old-fashioned that way.

We hope you've learned much more about oak barrels and how Montemaggiore utilizes them. We'll leave you with several fun facts:

If you want to learn more about the barrel-making process (and you have a high-speed internet connection), Tonnellerie Berger's website has some great videos on: the selection of oak in the forest, making staves, seasoning the staves, assembly, toasting, and head-fitting.